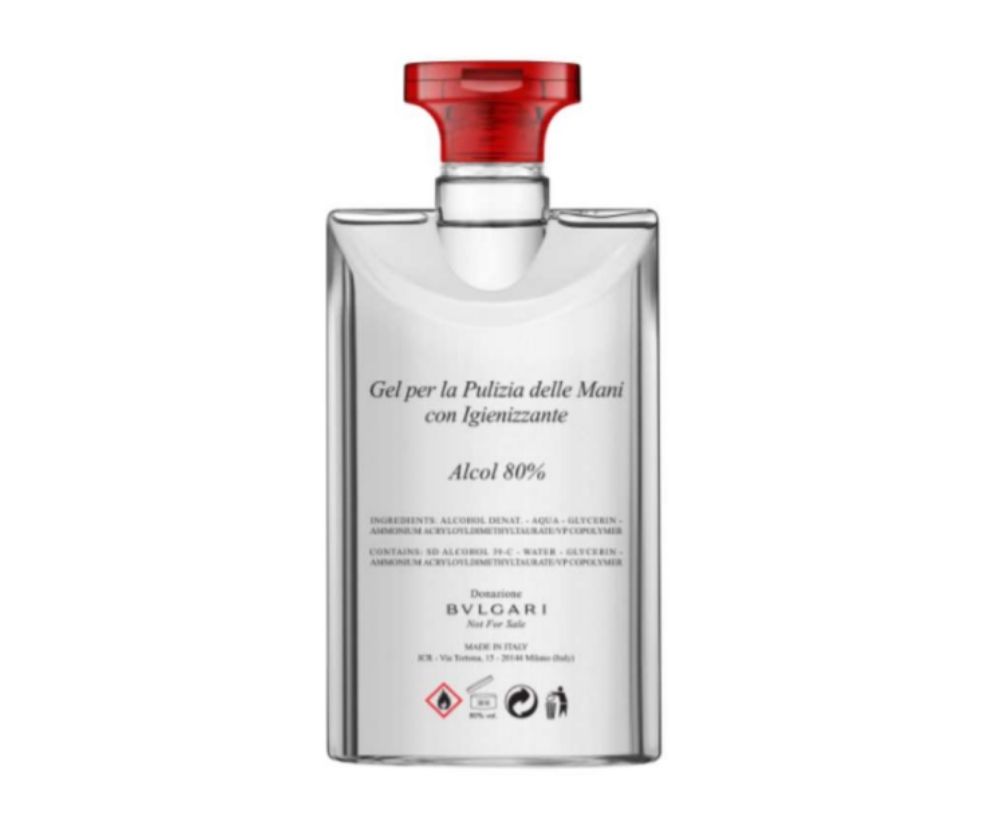 Roman jeweller Bvlgari extends their support to the fight against COVID-19 by producing and donating hydro-alcoholic sanitising gel. Produced at the ICR factory in Lodi, Italy – its historical fragrance partner – the sanitizer bottles were first donated to the most affected Italian medical establishments as a priority, via the Italian Civil Protection Department. Now, the brand has extended its support to Switzerland, a country in which the brand has more than 600 employees – starting with the Canton of Neuchatel, where Bvlgari employs more than 350 people and creates Watches and Perfumes for the whole world.

“As an economic stakeholder in Switzerland and particularly in the Canton of Neuchatel, Bvlgari has a responsibility to contribute to efforts aimed at preventing, fighting and eradicating COVID-19.Building on our expertise in perfumery, we have been able to develop – in collaboration with ICR – a hydro-alcoholic sanitising gel that will be produced in the Lodi factory (which usually manufactures the brand’s exceptional fragrances as well as our hotel lines, all developed in Neuchatel by Bvlgari’s world centre for cosmetics). Well aware of the current difficult situation we are going through, we believe it is our duty to contribute to the fight against COVID-19, thanks to our expertise and production capacities”, said Jean-Christophe Babin – CEO of all Bvlgari’s worldwide divisions and himself a resident of the Canton of Neuchatel.

As of April 10th, around 3,000 bottles of hydro-alcoholic gel (packaged in recyclable 75ml bottles) will be donated and distributed each week directly to the Réseau Hospitalier Neuchâtelois (RHNe) which comprises seven hospitals, including Neuchatel Pourtalès and another in La Chauxde-Fonds. Bvlgari plans to produce several hundred thousand bottles over the next two months for the RHNe, and if capacity permits, the donation to the Canton of Neuchatel may be extended to other cantons.

Neuchâtel Health and Finance Minister Laurent Kurth said: “We warmly thank Bvlgari for this generous contribution to the cantonal effort to combat the spread of COVID-19. We are pleased that this emblematic luxury company in Neuchatel has taken the initiative of helping its Canton in addition to its efforts on behalf of its country of origin, which has been particularly affected by the pandemic. It thereby confirms its longstanding ties with the Canton of Neuchatel and the attention it devotes to its environment”.

Muriel Desaulles, Director of RHNe, added: “Bvlgari is highly appreciated, as this product is the mandatory protection against the transmission of the virus for our collaborators. They lack throughout Switzerland despite constant efforts to source them. I would like to thank Bvlgari and I am proud that a company from Neuchatel has joined RHNe to help us fight against COVID-19.”